Known to be among the most important messaging app, WhatsApp continues to add more rich features for a better user experience. We’ve gathered 8 WhatsApp features that you should definitely check out if you haven’t already.

This is a feature that has been existing for quite a while now, it was first released for WhatsApp beta users but is now available for all users.

Once set, this feature makes chats disappear when the specified time set by the user comes. You can either set messages to disappear after 24 hours, 7 days, or 90 days.  It is important to note that this feature is turned on individual chats not generally on all chats at once. 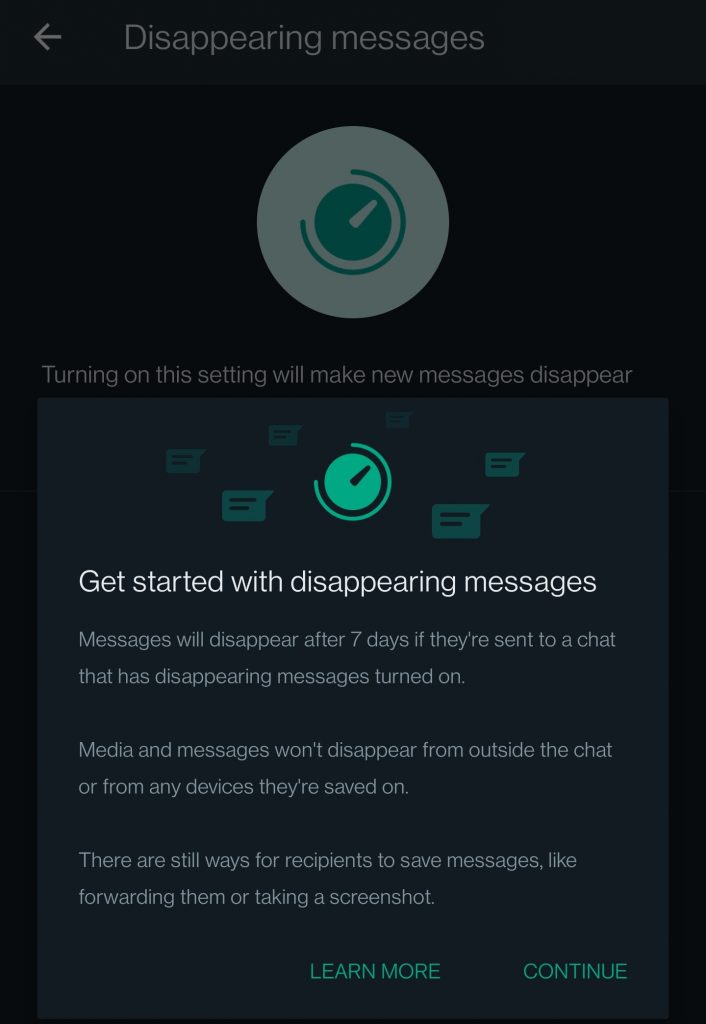 What happens when you turn off read receipts on WhatsApp?

After turning off read receipts, your recipients will see that their message got delivered to you, the two grey ticks will show up on their end. But, the blue ticks that indicate you read their message won’t show up.

The ability to post status on WhatsApp has been existing for a long time now. We might not want our friends or relatives to view some of our “status” due to certain reasons.

WhatsApp came up with a solution for that and gave users an option to choose who sees what we post on our status and who doesn’t.

Turning on the feature is simple. Head to the status panel and click on the three-dotted lines. Go to status privacy and choose “only share with”. From there you’ll be able to choose individual contacts with who you want to share your status with.

Photo/Video set to view once

This is among WhatsApp’s newly introduced features and was introduced recently.

Before sending a photo or a video you’re supposed to turn on the feature which is located close to the send button.

The recipient of the photo or video sent will only be able to view it once. It’s important to note that the feature doesn’t work if the recipient is on an older version of WhatsApp that doesn’t have the mentioned feature.

This feature brings the ability to play any WhatsApp audio up to 2× faster than the normal speed. You can adjust to either 1.5× or 2× speed.

Wave visualization assists in following the recording, this feature displays a visual representation of the sound of the voice message.

Draft Preview – before sending your voice messages, you’ll be able to listen to them.

Remember Playback – you can resume listening to a voice message from where you left if you pause while listening.

This feature is currently available for beta users, if you join the multi-device beta, you’ll be able to use linked devices without the need to keep your phone connected. Your personal messages, media, and calls will still be end-to-end encrypted.

How do you use WhatsApp reactions?

WhatsApp recently added message reactions, you know, like those reactions we have on Facebook and Instagram. The feature was first rolled out for Beta users but is now available for most users.  To get the reactions, long press on the message you want to react on, and the emojis should pop up. Note that you have to be on the latest version of Whatsapp.

How can I send large files through WhatsApp?

Within WhatsApp, you can now send files up to 2GB in size while being protected by end-to-end encryption. This is a substantial increase from the previous limit of 100MB.

Additionally, WhatsApp groups can now host up to 512 members and admins can delete group members’ messages.

WhatsApp is one of the most used and effective ways of communicating nowadays. With that in mind, Meta is working tirelessly to make the whole experience fun, one way of doing that is by adding rich features. let us know which feature you like most in the comment section.