What do I mean by Cool Android Apps?

One of the many good things about Android is that it’s open-source. This means App developers can get creative while making apps. This is what makes Android phones more fun to use since there are thousands of cool Android apps out there.

So kicking off the list is Hands-Free Music. This App was available on the Playstore last year but since then it’s been removed. To be completely honest it’s not all that surprising when you learn of what it does.

This app lets you search across every single song on the Youtube platform simply via lyrics. You just tap the microphone to say as many of the lyrics as you know and it will instantly present you with the most relevant song.

The coolest thing about the app is that it starts playing that music ad-free. I guess this is probably the reason google removed it from the Playstore. Still a great app though.

TM Whatsapp is a modded version of WhatsApp.

TM Whatsapp unlocks a bunch of additional and handy features among other things. The standout features of this app include being able to hide your WhatsApp status as well as blueticks, and read receipts. There’s also a theming engine to make the app look super unique.

There are just stacks upon stacks of other really cool features on top of those ones as well. Keep in mind some features only work if the other users you’re chatting with also have this version of TM WhatsApp installed. But regardless it’s definitely a powerful mod worth looking into.

Simple Calendar Pro is an app that needs very little explanation but I’m going to explain it anyway. The key component that makes this app unique is that it is a completely offline calendar application. This means your security and privacy are of the utmost importance plus it’s also completely ad-free which is fantastic.

It’s highly customizable as well, not only in the way the app looks but also in regards to how it handles your scheduling. It also offers a few widgets to select from. You can also sync calendar information from other apps if you need that sort of functionality. Definitely no frills but a solid option.

What is the latest version of Lawnchair?

Lawnchair 12 is the latest version and it continues to be among the best third-party launchers for Android.

Lawnchair 12 has received a lot of air time on many Youtube channels in the past few months. What makes this version so great is that it works with quick switch on rooted devices running Android 12. That means you can set it as your phone’s stock default launcher.  This gives it full access to the gestural navigation system which is amazing.

So if your phone’s default launcher offers pretty minimal customization options, for example, the pixel launcher. Then Lawnchair 12, in my opinion, is a must-have. Note that this requires you to root your phone.

Is there a temporary email generator?

Guerrilla Mail  is another no-frills application, but, it could go a long way to solving the seemingly never-ending issue of spam emails.  It does this by providing you with a disposable email address. You can then use it if a website ever asks you to enter your real one for one reason or another.
The app even shows any messages that your disposable email account receives. This is super handy if you ever need a verification code or something similar.

Dark mode live wallpaper is fairly similar to other automatic wallpaper changing apps, but it has a pretty nifty trick that makes it unique. Dark mode live wallpaper also lets you set up two different wallpapers. These will get automatically changed whenever the light or dark theme is activated. This app takes things to the next level by also letting you create dark versions of your favorite backdrops. It lets you do this directly within the app. This is a pretty simple yet effective solution.

Spotiflyer is a pretty handy app that allows you to download probably any online media to your device for offline playback. There’s very little wondering why this app isn’t on the Playstore. All you do is copy the link from wherever your media is located such as Youtube or Spotify and then you just paste it onto the app.

After pasting the link, hit search and then download all. The app will then extract the audio information and download it to your phone. 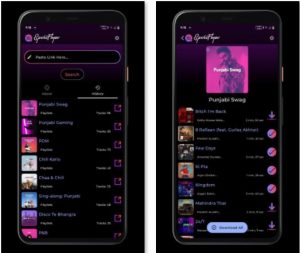 Wi-Fi QS creates a quick settings toggle that lets you turn on and off your wi-fi connection. Whilst that might seem completely unnecessary, anyone running Android 12 will understand why it’s so useful. For some weird reason, with the Android 12 update. Google decided to remove the separate Wi-fi and data toggles, instead, they replaced both of them with this singular internet toggle.

How do I know an app is using my camera or microphone without my permission?

Are you ever scared of an app using your microphone, camera, or GPS in the background without you knowing it? download Access Dots . This app lets you know exactly when those permissions are being used. It pops up dots on the corner of the screen whenever your microphone, camera, or GPS are in use. Whether it will be in the foreground or background.
The green dot means the camera is being used, the orange one is for the microphone. And the blue dot is for the GPS location. 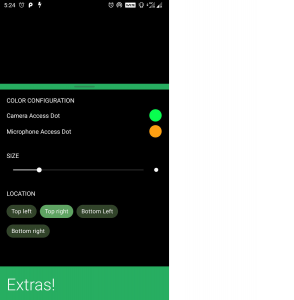 Within the app, you can see a log of the apps that access each permission and at what time. You can also customize the dots such as changing their colors location or size.  What I don’t like about the app is that you can’t separate the dots when multiple permissions are being used simultaneously. And I also don’t like that the app isn’t open sourced. It’s a good app though.